WE ARE RUNNING FREE

ALL OUR SQUAD PLAYERS

PLEASE CHECK YOUR EMAILS FOR DETAILS.

YOU SHOULD HAVE RECIEVED THESE SOME WEEKS BACK.

TAKING THE LATEST GOVERNMENT ADVICE ON THE CORONA VIRUS

The following players have been selected to represent :

Congratulations for being selected for this Pininicle Junior Event

BJBA had a brilliant entry in this year's ACDBL singles events, with over 55 of our players taking part.  The tournaments were played over two weekends at the end of February and beginning of March 2020.

All our players played well and hopefully had a lot of fun.  There was some great badminton on display.

The following children deserve a special mention for their fantastic results:

U10 Boys A grade winner: Akhil

U10 Boys A grade runner-up: Siddharth

U10 Boys B grade winner: Samay

U10 Boys B grade runner-up: Varun

U10 Boys B grade semi-finalists: Vihaan and Aditya

U10 Girls A grade semi-finalist: Diya

U12 Boys B grade winner: Ashwin

U12 Boys B grade semi-finalist: Sahil

U12 Girls A grade semi-finalist: Sian

U14 Boys B grade semi-finalists: Aneesh and Tim

U14 Girls B grade winner: Dhruvi

U14 Girls B grade semi-finalists: Sakhi and Krisztina

U16 Girls B grade winner: Dhruvi

U16 Girls B grade semi-finalist: Sakhi

Well done to everyone who played and congratulations to the winners, runners-up and semi-finalists!

NOW HAS AN U16 BOYS & GIRLS LEVEL DOUBLE EVNET

On Sunday 7th July 2019 12 of our young players travelled to Epsom to play in the Surrey Invitation U12s singles and team tournament competing against players from five other counties.  Each player played nine matches over the course of a very hot day.  The players were Tranthini, Holly, Simone, Anushka, Avani, Jemima, James, Gideon, Mehul, Neerav, Kye and Riley.

In the team event the winning counties were decided on the combined score of the top four girls and boys from each county.

Our top four girls: Tranthini, Avani, Holly and Simone won the girls event and infact five of our girls were in the top eight out of 40 girls who took part!!  Our top four boys: James, Gideon, Kye and Mahul came second in the boys event, being narrowly beaten by Surrey.  In the overall team event it was so close, but Surrey narrowly won it, beating us by only 3 points.

Well done to all our younger players who played really well.  Many of you have got more years in this tournament, so we have high hopes for continued success in the future.

Well done everyone.  Special mention to Ajith for managing, and all the parents for giving up a day in the sunshine and supporting the team so well. 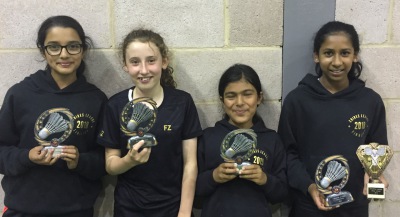 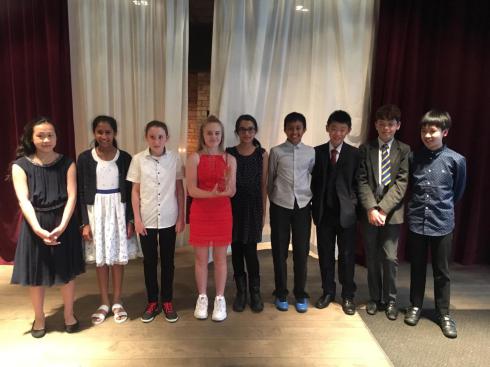 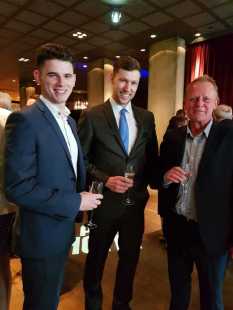 On Sunday 2nd June 2019 our U14 County team travelled to Wolverhampton to play in the Shires League National Finals.

The team - Dillon, Ivan (team captain), David, Vinay, Ethan, Sofie, Tranthini, Lydia, Shreya, Anagha, Holly and Ruby, had played six other counties in the Shires League, finishing second out of 32 counties, to qualify for the National Finals.  In fact we won 114 of 120 matches played in the league.

On Sunday, in the finals, we were drawn against Lancashire in the first round and secured a convincing 20-0 win.  But we knew that there were tougher challenges to come and in the semi-finals we met the league topping Yorkshire.  After a tough battle and some hard fought games we came through victorious with a close 11-9 victory.  In the final we came up against Hampshire, another strong team.  We knew that we would have to play our best to win through.  We had a rocky start, going 3-1 down in the mixed doubles, but after some fantastic individual performances in the singles and some great teamwork in the doubles, it all came down to the final girls' doubles match.  The score was poised at 10-9 to us, with only 3 points between the two teams.  But our girls held their nerve, in a very pressurised situation, and won through, meaning Berkshire were crowned Under 14s Shires League National Champions 2019!!

The team were fantastically managed and coached by Andy Clark and Berkshire Head Coach, Chris Tonks.  Every player gave their all for the team and each pulled off fantastic performances when needed.  They all showed fantastic team spirit, cheering each other on and supporting each other throughout the day.  A special mention for the parents too, who make many sacrifices to support their children with their badminton, and who lived every moment with them on the day! 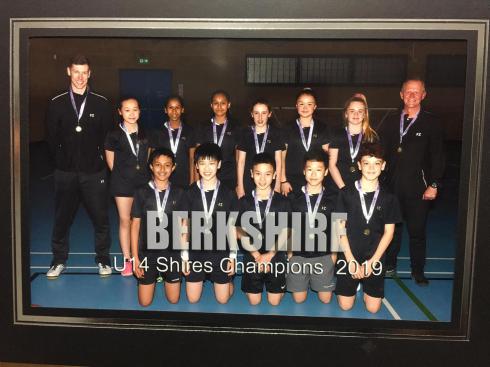 Our four County teams- Under 12s, Under 14s, Under 16s, and Under 18s all reached the National Finals this year.  This is a brilliant achievement for Berkshire.  Well done to all the players who have oplayed in the squads this year!

On the weekend of Saturday 22nd September Berkshire held their restricted tournaments.  There was some fantastic badminton on show, with new and more experienced players taking to the court to try and become county champions.

Click on Junior Leagues and Tournaments above, and then Berkshire Restricted Results to find out the winners!

On Sunday 1st July 16 of our young players travelled to Epsom to play in the Surrey Invitation U12s singles and team tournament competing against players from five other counties.  Each player played nine matches over the course of a very hot day.  The players were David, Ivan, Vinay, James, Ethan, Riley, Moksha, Mehul, Tranthini, Shreya, Anagha, Holly, Avani, Anushka, Meghna and Roma.

We had some fantastic individual and team successes.  Ivan came first in the boys individual event, closely followed by David in second place.  While in the girls event Shreya came third, but was desperately unlucky not to finish first or second, as she only lost won game the whole day, and the top three positions were decided on points as all three were tied on matches won.

In the team event the winning counties were decided on the combined score of the top four girls and boys from each county.  Our top four boys: Ivan, David, Vinay and Ethan won the boys event, narrowly beating Surrey, while our top four girls: Shreya, Anagha, Holly and Avani won the girls event, also beating Surrey into second place.  Special mention to James who played team mate Ethan in a fantastic battle and deciding match for forth spot, and narrowly lost out.  Well done to all our younger players who played really well.  Many of you have got two or three more years in this tournament, so we have high hopes for continued success in the future.

Finally at the end of the presentation, overall team winner was announced, and we won the title receiving a fantastic trophy!  We have won the combined trophy for two years in a row now, so we are definitiely the team to beat!

Well done everyone.  Special mention to Raymond and Hence for managing, and all the parents for giving up a day in the sunshine and supporting the team so well. 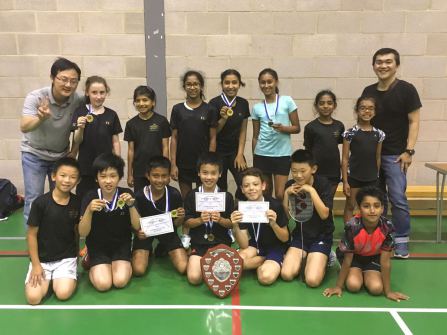 On the 13th of May 2018 BJBA Under 14s badminton players won Gold and were crowned 2018 National League Champions at the National Junior League Finals.

Regional competitions were held in age groups of under 12, under 14 and under 16, in a team format mirroring that of the Senior National Badminton League, 1 boys singles, one girl's singles, one boys' doubles, one girls' doubles and one mixed game.  As winners of the Surrey South Plus regional round in Epsom in April, BJBA Club U14’s qualified the U14 finals.

In the group stages of the final the BJBA team started with an emphatic 5-0 win over Stowmarket BC and followed it up with a another 5-0 win over North Hertfordshire. Little did BJBA team realize that the final group match against Kesteven Superzone was going to be the most important of the day. A loss would have resulted in a draw for 3rd or 4th spot whilst a win would give the BJBA team a very strong chance of winning the championship. The match was tied 2-2 after the first 4 rubbers and would be decided by the mixed doubles.  Shreya and Adthi held their nerve and won the game.

BJBA played against last year's runners up Chew Valley JBC in the finals, and managed to win 4-1, so BJBA were crowned the National Champions in the U14s category.

Gold in the National Junior League Finals is a great achievement for the club which is participating for the first time. The competiton was won by 6 young players but belongs to all junior players with the club, coaches and committee members. Big thanks to the Head Chris Tonks and Team captain Adam Weston for travelling 150 miles to support the young team.

BJBA play in Crossfields, Sandhurst & Academy Sports throughout the week. 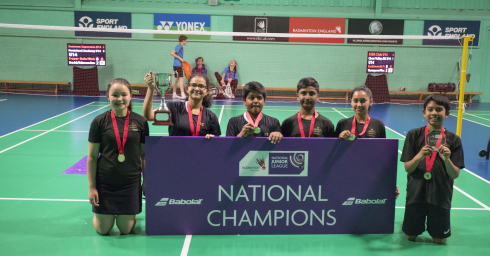 Our Under 12s County team finished top of the Shires League, having played matches against six other counties over the course of the season, and as one of the top 8 performing counties travelled to Aylesbury on April 8th to play in the Shires League Finals.

In the first round they faced Hertfordshire.  Berkshire made a great start and won convincingly, taking them into the semi final.  Next they faced the mighty Yorkshire, who won the title last year.  The team pulled together really well- supporting each other and all giving 100%, and after a hard fought battle we overcame them, taking us through to the final.

In our last match we met Warwickshire, another strong and organised team.  With incredible determination and fantastic teamwork we came through to win the match, and were crowned 2018 Shires League Champions!

Special thanks must go to Andy and Ruby, who were unable to be at the final.  Andy managed the team and Ruby played in all six matches the team played on the way to the finals.  They both played a vital part in the team's success.

Thanks must also go to Chris H, who managed the team brilliantly at the finals, simultaneoulsly watching three matches, giving inspirational mid-match tips and encouragement, and cheering on all the players.

And finally, thanks to all the parents who brought their children to the finals, and tirelessly cheered on, encouraged and supported all the players.  You should be very proud of your childen! 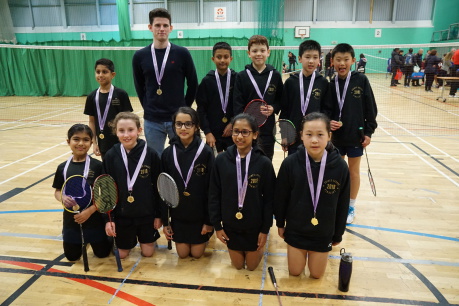 Local mortgage advisers Clark and Poole Limited provided the U12 Team Hoodies for the finals.

Further information is available at www.clarkandpoole.co.uk